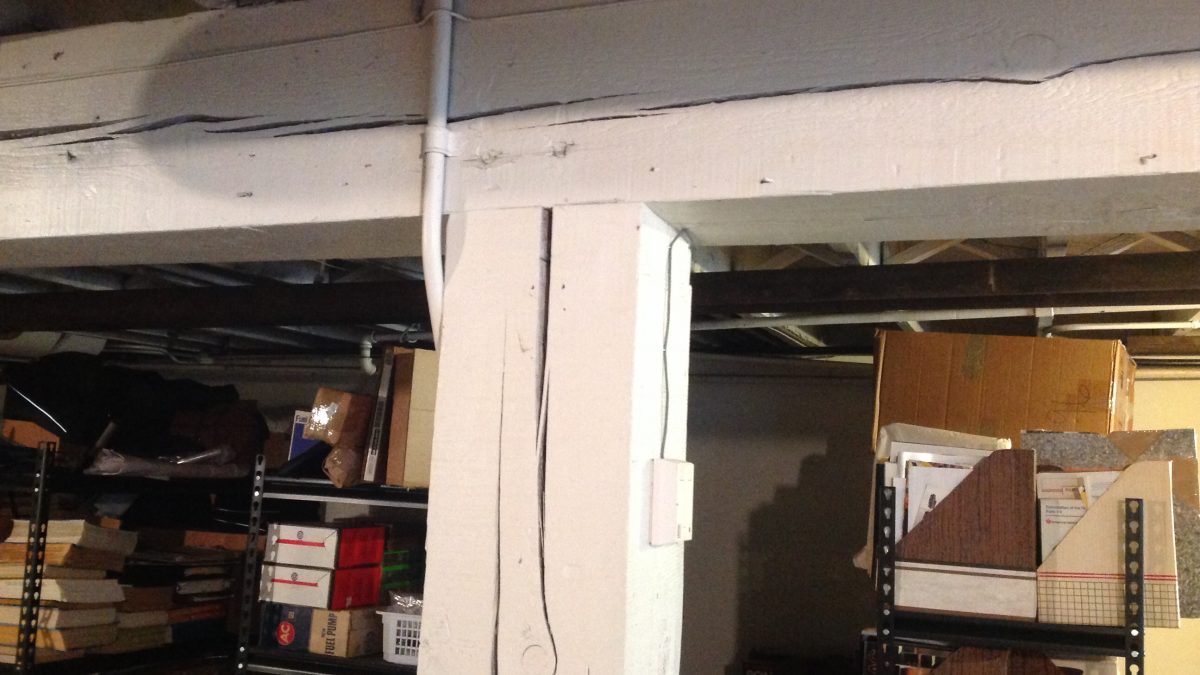 Nearly all wooden load bearing posts and carrying beams in basements develop cracks after homes have aged 100+ years. In our visits to these old properties, many of the cracks we see are wide enough for a thumb to comfortably fit in the gap. Obviously concerned about these cracks in their posts and beams, homeowners often have questions about how they can be repaired or if a replacement may be necessary. Here are a few of their commonly asked questions:

What causes these cracks?

As a parallel to real-life posts and beams, imagine you’re pressing down on a vertical styrofoam post that is as big around as the barrel of a baseball bat. With the styrofoam representing the load bearing basement post and your pressure representing the weight of the house, your continued pressure downward on the styrofoam will eventually buckle and crack the post. This example illustrates more quickly what is happening to your home over decades of time. Here is an in-depth breakdown of the stages of this simulation:

In the real-world scenario of an actual house, cracking in your basement’s load bearing posts and carrying beams is their own way of deflection. Since they aren’t flexible enough to bend in one direction like styrofoam, they deflect in several directions. This results in portions of the post moving outward and creating cracks. As pop-culture reference, think of The Hulk pressing down on a tree trunk. With enough pressure, the trunk breaks up into pieces and they disperse sideways as the formed trunk disappears.

How serious are these cracks?

The engineering standard for a failed basement support post or beam is the presence of a substantial crack which exceeds the measurement of the width of the post or beam. For example, having an 8 inch crack in a post which is 6 inches wide constitutes a “failed post.” In the real world context, neighborhoods with houses 100+ years old are full of load bearing posts and carrying beams which would fail this standard.

Replacement of these support beams and posts is normally called for only on the occasion where we see substantial cracks and obvious signs of failing such as “settling”, which results in uneven and sloping floors. All settling is deflection and is usually the key to triggering replacement.

How much sloping floor is too much?

Basement support post and beam systems take a long time to break down to the point of collapse. Most settling and out-of-level conditions in a home creates an aesthetic concern, but it’s not a threat to life and general safety. However, the low-worry aesthetic problem can quickly become a large financial problem when the sloping floors scare away prospective buyers when you are trying to sell your home. Approximately half of the sloping floor issues we confront are due to customers’ inability to sell their home. Unfortunately, the longer you let it deteriorate, the harder it is to fix.

Most homes in Minneapolis and St. Paul that were built over 100 years ago have a main support beam running down the middle of the basement and joists reaching from that beam to both sides of the foundation to form the floor of the first level. This joist line, from the center of the home to the side foundation, is often 13-15 feet. In our 40+ year history of helping homeowners, we have found that if your center support beam has sunk to a point where it is 5/8 inch to ¾ inch lower than the side foundation, you are just like everyone else on the block and it is not concerning to homebuyers. But if the center carrying beam is an inch or more lower than the side foundation, you will begin receiving objections from prospective buyers about sagging in the center of the house.

At Brad Scott Construction, we are able to reverse most of the settling to the extent that the sloping floor is no longer visible. Conditions vary and not all settling can be 100% resolved, but your eye will forgive a certain degree of sloping. In the process of settling homes, the introduction of new steel and engineered lumber basement posts and beam systems can assure that the improvements made in lifting the house and leveling floors will not be lost. 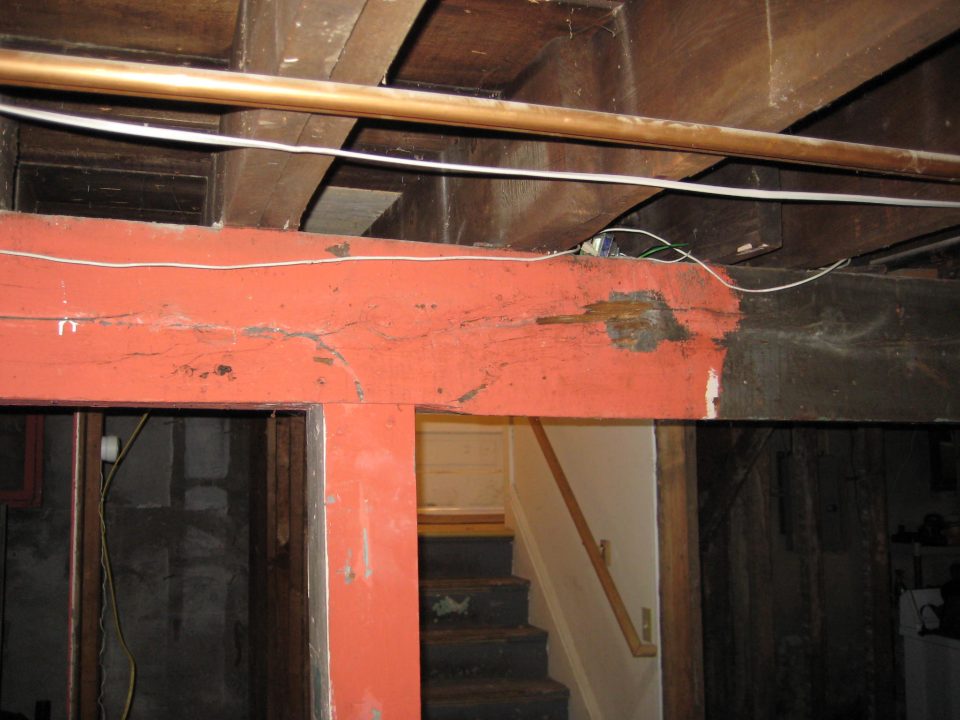 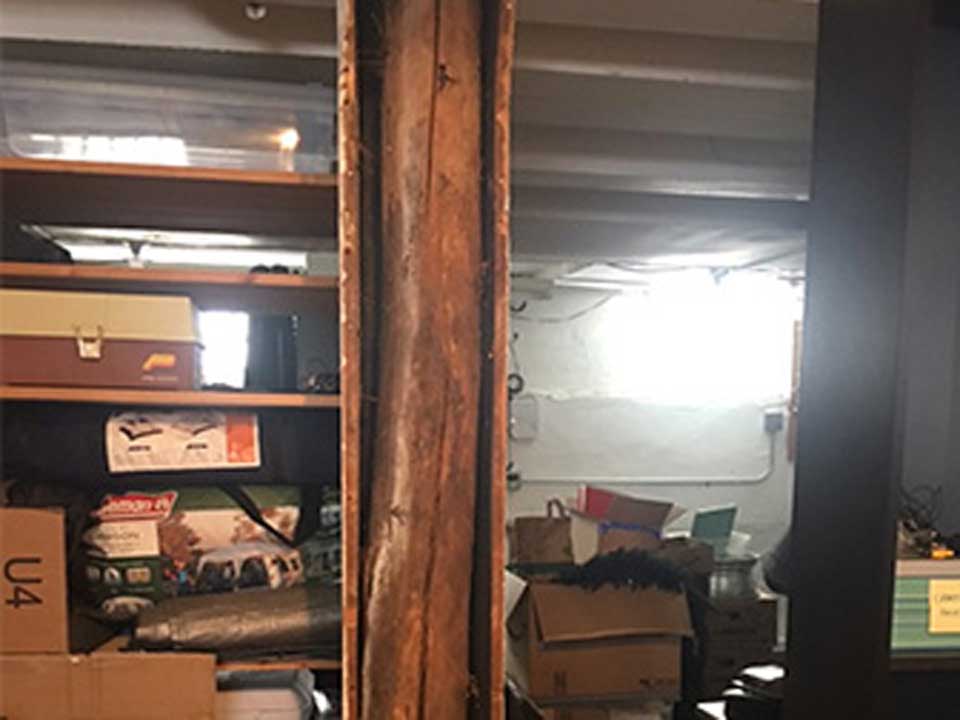